Boondoggle: Noun. Work or activity that is wasteful or pointless but gives the appearance of having value.

Maybe it was pointless, but dang was it fun! The winter 2016 Boondoggle was Jan. 23-24 on the Whitefish Chain at the Rollie Johnson Islands Recreational Area.

We had more than 20 people come out for the day Saturday, and four tents comprised our little tent city out on the island. Some drove out, some cross-country skied out, some walked and some kited to get to the island. We ate, we drank, we played kickball. There might have been some kiting in there too.

We hope to make these Boondoggles a regular thing, so keep an eye out for future gatherings! Huge thanks to Melissa Grover and Bryce Johnson for the great pics!

Heading out to the island, kiters in the background

Melissa on her way to the island/campsite

The wind was up!

Check out these hardcore kids, on their first-ever winter camping trip! 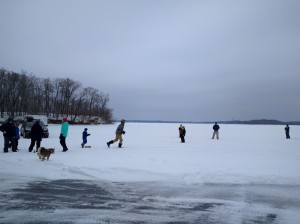 Fire on the ice

Morning in the tent

Morning in the tent

Grant and Auria, the smallest of our MN adventurers

Heading off the lake- rather than kite (no wind) we just made a chandelier of skiers and sledders behind the car.

Is it skijoring if you’re behind a car? What’s that called?